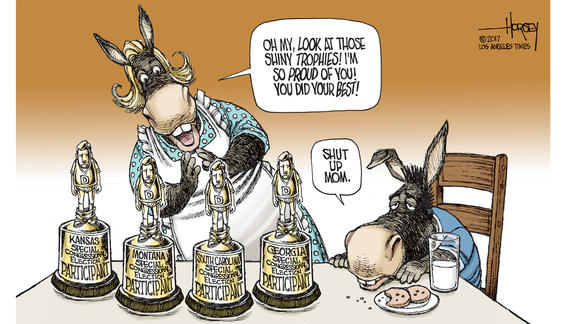 As long time readers likely know I don’t love the Dems, but am a Dem by default because I, for the most part, despise the Republican Party,  increasingly so since they made a pact with the devil in his earthly form of Donald Jerk Trump.   What gets me about the Dems, though, is how they keep talking about needing to improve their message after losing to Trump…………

Trump won because his message was a fantasy that expressed the frustration and anger among many at what they see as the loss of the America they’ve known….. Like pounding a pillow in a Gestalt Therapy session, Trump is a vehicle to express their resentments.   Also, he promised the moon and everyone started imagining an abundance of cheese sandwiches coming their way.

It is not that the Republicans had a real message that beat the Dems.   The problem is many Americans believe in the possibility of simple solutions that will fix our complex problems…..or at least improve their lives.   And our boy king, as I like to think of him, has a treasure trove of simple solutions.

Or along the lines of the fairy tale “The Emperor’s New Clothes,”  for our political stalemate to really change the basic Trump fan (which you do know is short for fanatic, right?) has to come to see he is naked as a jay bird.

What concerns me is it’s unclear how many of those fans have absorbed so much of the cool aid as to leave them permanently blind.

We’ll have to wait and see.